This technical report introduces content concerning the development of JMAG technology.
As the previous section introduced why matrix solvers are necessary for the simulation engine, the following describes how a high-speed solver was implemented into JMAG.

JMAG has been developed to provide a tool that can drastically reduce costs and increase efficiency throughout the design process via high-speed analyses for a variety of different analysis targets.

JMAG utilizes a wide range of ingenuity to achieve the high-speed analyses that it offers. The main innovations focus on improving the algorithms and calculation processes as well as implementing a function for parallel computing. The amount of time required for an analysis in version 9.1 has been reduced to 1/5 the amount of time required in version 8.3, as indicated in Fig. 1. Although the time required depends on the type of analysis, JMAG has successfully quintupled the analyses over 4 years. 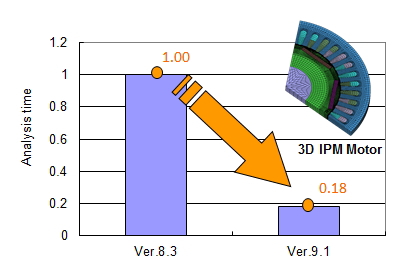 Fig. 1. Time Require for an Analysis in JMAG by Version [1]

If It’s Not Fast, It’s Not Worth Using

Why is the speed of JMAG such a large part of the development process? Speed is vital to meet the demands designers face each day.

The number of designers using CAE tools is increasing as the performance analysis software offers grows. In an extremely competitive product development industry there is constant pressure to reduce the number of prototypes as well as the amount of time for developing a product. Research has shown that the amount of time allotted for design in the automotive industry has decreased by 40% in the last 10 years.

JMAG is implement into the design process to increase efficiency and reduce costs. The speed of the solver is indispensable to meet these demands. Therefore, if the solver is not fast, it is not worth using.

JMAG has implemented parallel computing to attain a faster analysis. Why parallel computing? Parallel computing is used because the matrix solver for linear equations requires the most time for an analysis. Analyses performed using ICCG make up 80% to 90% of the time required for calculations performed based on our internal research. Therefore, JMAG has been designed to perform analyses with ICCG by implementing symmetric multiprocessing (SMP). The speed attained using symmetric multiprocessing is indicated in Fig. 2. Compared to an analysis that uses a single processor, an analysis that is distributed over eight processors offers 3 to 4 times the speed. Furthermore, these results were obtained using computers with two Intel® Xeon 5500 Quad Core CPUs. 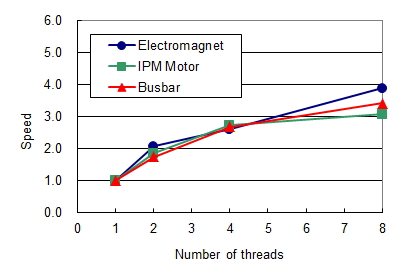 The robust parallel solver JMAG offers is vital for both the hardware and the solver. How was this robust solver realized? Let’s take a look at three factors that influence the development of the solver:

Unfortunately, the performance of parallel computing differs according to the hardware that is used. How can a high level of performance be accomplished on an assortment of hardware? A vast amount of trial and error with a lot of fine tuning is required.

The parallel computing function implemented in JMAG was tested on a wide variety of the latest hardware with the cooperation of the hardware vendors. A lecture the Sumisho Computer Systems Corporation presented at the JMAG Users Conference 2008 regarding the present and future state of multi-core processors used the ICCG solver in JMAG as their example.

The hardware JSOL used to test and refine the solver in JMAG is indicated in Fig. 3. Seven out of nine of the CPUs that could effect parallel computing had already been tested with JMAG. 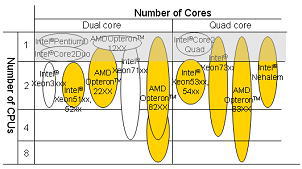 Regardless of how fast an analysis can be performed using parallel computing, the analysis is useless without the ability to obtain accurate results. This is why the primary focus for the development of JMAG is stability.

Various measures have been researched and tested to achieve a materix solver in JMAG that provides the highest level of convergence.

A wide range of tests have been performed to successfully develop a high-speed solver that uses parallel computing while maintaining stability.JMAG provides a faster solver for a variety of analyses from static to transient and frequency response analyses that can be performed for a wide range of analysis targets that include motors, magnetic heads, bus bars, and magnets.

(3) Applying Algorithms Accounting for the Number of Threads

Presently, the maximum number of threads supported for multi-cores is 8. Therefore, JMAG applies algorithms specifically for this size of parallel computing.

Technology for parallel computing is influenced by innovations in multi-core hardware. Recently, hardware that applies parallel computing has been introduced to the market as manufacturers such as Intel® and AMD continue to revolutionize multi-core computer processors. Software developers are currently focused more on utilizing multi-core parallel computing because increases in the clock speed of the CPU environment can no longer be expected.

Increasing the Speed of JMAG

In the future, innovations for multi-core computer processors will continue to be a vital part of implementing further innovation into JMAG.

This innovation is not only being applied to further development of a parallel solver, but also to increase the speed of analyses performed on a single processor. CAE tools do not make the products. However, JMAG aims to provide the fastest magnetic field analysis solver to assist our users in designing the highest quality of products possible.

The next edition will introduce how the mesh generation engine has been enhanced to meet the diverse needs our users have.

Issue 1 Why is a high-speed calculation engine necessary? 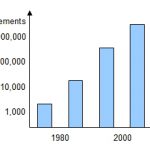 Issue 3 What Does the JMAG Mesh Generation Engine have to Offer? 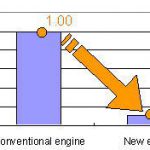