JMAG-RT enables model based development with high concurrency, allowing plant design and control design to be performed concurrently. JMAG-RT is a system which generates high-fidelity plant models (JMAG-RT models) in a system level simulation from FEA models. From system design, to ECU verification using HILS, JMAG-RT has a wide range of uses. 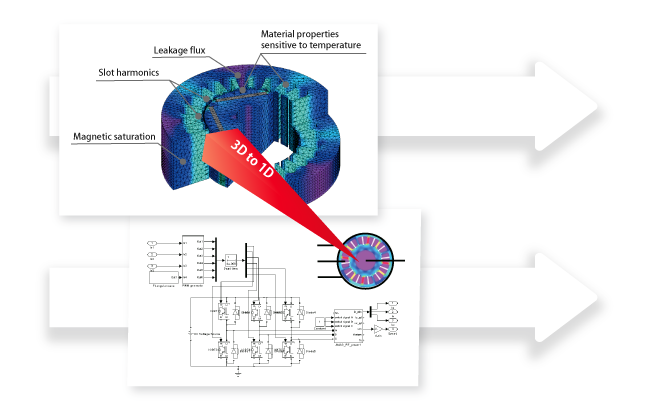 Information accounted for in JMAG-RT

Above is a graph depicting inductance characteristics possessed by the JMAG-RT model. The inductance characteristics have current amplitude, current phase and mechanical angle dependency.
Current amplitude will change depending on the state of the motor load and as a result, the inductance value of both the current phase and mechanical angle will also change.
JMAG-RT is capable of simulating spatial and temporal inductance and torque variations.

How to Obtain JMAG-RT Models

RTT files are generated by JMAG-RT library manager during design simulation by JMAG.
RTT files are available from motor makers.

The following are also prepared as a alternatives.
[1] This model will be less specific than those generated from FEA in JMAG.

How to Check JMAG-RT Motor Models

*For more information about each company, see the Product Partners page.
*Product and service names mentioned or referenced in this paper are trademarks or registered trademarks of their respective owners.