Mid- and large-sized power transformers need to be able to operate over the long term, so they are always required to control running costs from losses. Iron loss is one of the main losses in a transformer, and it can lead to temperature increases and efficiency decreases because it consumes electric power as heat in a magnetic material.
Using finite element analysis (FEA) to confirm the distribution of iron loss density makes it possible to study a transformer’s local geometry during design. Further, iron loss is divided into hysteresis loss caused by hysteresis in the core and joule loss caused by eddy currents, and analysis makes it possible to compare the relative contributions of each of these.
This Application Note presents how to obtain the iron loss and the ratio of hysteresis loss and joule loss within that iron loss for a three-phase transformer. 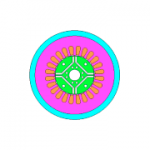