Solenoid valves are used to adjust the inflow or outflow of liquids or gases by translational movement of the iron core. If an electric current is passed through the coil, an electromagnet is created and an electromagnetic attractive force is generated between the movable part and the fixed parts. Since high responsiveness is required for valve opening and closing, an important item to evaluate is whether or not the power source used for driving and the solenoid valve meets the required responsiveness and attractive force.
Solenoid valves are often used for hydraulic valves and injectors, and the movable part itself is placed in high pressure liquid and encounters flow resistance. Since the movable part uses a guide to move, there is error with the possibility to cause an inclination. In the case of inclination, the electromagnetic attraction force is unbalanced, so it is necessary to confirm beforehand whether or the force acts in the proper direction.
It is useful to examine by FEA beforehand whether there is a change in the attractive force when there is an inclination and whether an unbalanced force causes the movable part to become unaligned.
In this example, an example is presented where the influence on the electromagnetic force by the presence or absence of inclination is confirmed at each position of the movable part.

Position and Inclination of The Movable Part 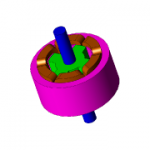