At the JMAG Users’ Conference in Strasbourg last October, Hiroyuki Sano (JSOL) and Yves Thiolière (Powersys) gave a detailed class tutorial on the hysteron, a defined trapezoidal shape that is part of JMAG’s “play model” for magnetic hysteresis and the power loss that arises in laminated electrical steel. As a class we were given exercises, and I must say that while I was struggling with mine, I noticed the engineer sitting next to me (Didier Zefack of Powersys) had already finished his!

Magnetic hysteresis was discovered in Japan by a Scotsman, James Alfred Ewing. From 1878 to 1883 Ewing was Professor of Mechanical Engineering at the University of Tokyo, in the Meiji restoration period when several foreign academics and other experts spent periods there. Ewing was at the Old University buildings at Hitotubasai. Japan struck Ewing as being “wonderfully easy—all the little annoyances and vexations one met with in the home country were absent”. But he worked hard and well with the Japanese, whose customs and manners he respected, finding his pupils receptive, intelligent, and quick. It was in Japan that Ewing became engaged to Annie Washington of West Virginia, who was resident in Japan with her family. It was also in Japan where Ewing’s work on magnetic hysteresis became established. This is a fascinating story of measurement and theory, leading later to a molecular theory, which engaged him with many of the momentous engineering and scientific developments of the late 19th and early 20th centuries, especially in electrical transformers and rotating machines. It was in 1881 that Ewing coined the term hysteresis. He soon became the leading authority on the subject, with milestone papers in 1885 and subsequently in the Philosophical Transactions of the Royal Society and the Electrician, culminating in a book Magnetic Induction in Iron and Other Metals, which quickly became the standard reference for engineers and physicists. One fascinating aspect of the hysteresis story is the interaction between Ewing and Steinmetz, in which Ewing’s theory was eventually upheld while Steinmetz’ “law of hysteresis” was proved to be an empirical engineering rule “midway between physics and ad hoc design rules”. (Paragraph quoted from U.K. Magnetics Society MagNews).

All this makes us think about “play models”. When I first heard the term, I had difficulty taking it seriously. My education taught me that theories were ponderous, rigorous, and difficult, and based on the facts. But these stories make me think again. Certain intellectual elements seem to be common. One is the careful measurement and observation of physical phenomena. Then there is a process of questioning and the postulation of possible theories. Initially these are often crude and incomplete, and it takes decades of refinement and verification to establish a truly reliable theory.

One can easily imagine that Ewing’s molecular theory started as a “play model”. Like many other theories in physics, it postulates causes and effects. Ideally the outcome is a deterministic theory, in which every observed phenomenon is caused by others which can be considered more fundamental. Here, we can surely see that this is unlikely to happen with the “hysteron” model, because it does appear to be “phenomenological” or “heuristic”. We have the words to describe it! It mimics the observed phenomena, without explaining them in terms of deeper principles. “Midway between physics and ad hoc design rules” — not unlike Steinmetz’ law of hysteresis.

This does not mean that it will be inaccurate. It can be “as accurate as we please” (to borrow terminology from the mathematicians). We simply have to refine it and calibrate it according to measurements, and it will then do a job in engineering design calculations which is much more difficult — even impossible — with quantum theoretical or molecular accounts of hysteresis.

With this approach, as engineers we risk criticism for applying formulas without really being able to prove them. But isn’t that what we do? Steinmetz was the chief design engineer of no less than the General Electric Company, while Ewing went on to write the standard textbook The Steam Engine and Other Heat Engines in 1894, which ran to several editions over more than 30 years. Yes, the steam engine! How many steam engines were built to transform society without being able to prove all the principles on which they work, or the details of the metallurgy and metalworking and fuelling and myriad details of rivetting boilers and routing pipework?

So, “full steam ahead” with the hysteron and see where it leads! 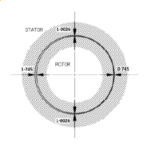 [No. 9] Can a magnetic circuit work without air ? 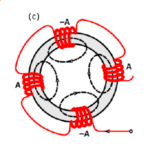