Next in alphabetic sequence is J — which could stand for ‘JMAG’ or ‘JAPAN’, but instead let us think of J as the common symbol for current-density. Sometimes when I think about current-density I’m reminded of the notice that is printed on cigarette packets: SMOKING KILLS. The same notice could be put on the name-plate of every electric motor!

By the time a motor is smoking, its insulation temperature is already far above its normal limit, and irreversible damage has been done to the insulation. The overheating is almost always caused by excessive current-density, J.

The failure of motor windings or generator windings due to excessive temperature is a little complicated. Only in extreme cases is the failure sudden and catastrophic. It is more likely that a relatively modest excess of temperature will ‘shorten the life of the insulation’. We usually understand that to mean that the time to catastrophic failure becomes shorter and shorter as the temperature increases. The rule of thumb is that the insulation life decreases by half for every 8−10°C increase in temperature. (This is sometimes called the law of Arrhenius). But motor windings are often intended to last for ten or twenty years, so the damage caused by a modest excess of temperature may not be immediately apparent; indeed its effects may not occur for several years.

The extraction of heat from motor windings is a complex matter involving conduction, convection and radiation, to say nothing of fluid processes and contact resistances. There are significant temperature variations throughout the volume and even at different locations on the surface of the frame. So it would be very convenient to have a single parameter, or perhaps one or two parameters, which could be used as a guide to the thermal stress that the winding is undergoing.

Unfortunately there is no single parameter that does this job for all motors in all applications. But for a given motor, or class of motors, in a defined application environment, it is often possible to rely on one or two such parameters. For example, the ‘touch temperature’ on the frame surface is an obvious measure of motor heating, and there are many cases where the motor frame is accessible to the touch, so that this test can be made. It is not recommended — for obvious safety reasons — but it is a common habit of engineers and technicians who are familiar with the product and rely on their own senses to check that all is well.

The other parameter that is, let’s say, very interesting in connection with motor heating is the current-density J. We cannot prescribe a single value, or even a range of values, that indicates safe operation for all kinds of machine. At the high end, there are machines running 25 A/mm2 continuously; but these machines will be using liquid-cooled conductors or oil-spray cooling on the end-windings. Such a high value is certainly not possible continuously in ordinary air-cooled machines or even machines cooled with water-jackets.

At the lower end we might have current-densities of the order of 3−5 A/mm2 in totally-enclosed motors that operate with a high duty-cycle (in other words, nearly continuously) so that the temperature rise is dependent on the steady-state cooling and not buffered by the thermal capacity of the windings and other parts in the machine. For short periods (intermittent duty), or ‘one-shot’ operations, higher values are of course permitted — in some cases, much higher, reaching 40 A/mm2 for very short periods. It would be rash to try to state an upper limit, but there are motors and actuators that use such high values of current-density, and even higher, transiently for very short periods.

Many years ago when working in the United States I asked an experienced colleague what was the highest current-density he had ever encountered in electric motors. His reply was ’80’. At first I was shocked, because I thought he meant 80 A/mm2. I didn’t know what to say, because I knew that my colleague was a highly respected machine designer, and besides that he could trace his family history back to the American Civil War, where his great-great-grandfather had been a famous general. Who was I, a junior, to question a current-density of 80? I went home that night, and worried greatly. But in that company they reckoned current-density in terms of circular mils per ampere — actually the reciprocal of current-density, but still a perfectly sensible parameter. One circular mil is the area of a circle of diameter 0⋅001 inches, which is 0⋅0254 mm, giving an area of 0⋅5067 × 10−3 mm2. So what he meant by ’80’ was 80 circular mils per ampere, which is equivalent to 0⋅040537 mm2/A, or 24⋅67 A/mm2. That is still very high, but not quite so shocking as 80!

A circular wire of cross-sectional area 80 circular mils has a cross-section area of 0⋅040537 mm2 and its diameter is therefore 0⋅2271856 mm (close to A.W.G. 24), and we can imagine driving 1 ampere through it, giving a current-density of 24⋅67 A/mm2. In free air, that wire would get very hot very quickly. It would be smoking within a few seconds and it would soon melt. I am making these statements from a general hand-waving point of view, based on years of experience: they are not precise statements, but guidelines or rules of thumb. In S.I. units, 25 A/mm2 is 25,000,000 A/m2, which is not a practical value to carry round in one’s head. How many of us have motors carrying currents of millions of amps, or conductors whose areas are measured in square metres? All of this story is really told as a way of emphasizing the importance of sensible, practical units in engineering.

Now what does all this mean for the motor designer struggling to perfect a lamination geometry or a winding layout, or sizing a new machine? The answer is apparently very clear:

We can make quite a strong statement about this. It is pointless to work on the details of a motor design without knowing the acceptable range of values of J that can be used.

However, in the overall design process the electromagnetic engineer needs a value of J, or a range of values, to constrain his or her work. So we can see why J is so often used in descriptions and discussions of designs and design features. A suitable value cannot be plucked out of thin air and used at will; but even so, a single value or a small range is an extremely convenient link between the electromagnetic design and the thermal design. So the rule ‘Know your current-densities’ really implies that a good value or a range of values should be obtained by coordination with the thermal design, and then it can be used in the basic electromagnetic design.

Note the use of the plural ‘current-densities’ rather than the singular ‘current-density’. The current-density is not necessarily the same in all parts of the winding, and different values may occur at different times. Also, the temperature conditions vary throughout the motor and also with time, which further complicates the choice of a suitable range of values of J.

Similar arguments apply to the flux-density B, which is perhaps more complicated than J because it varies widely throughout the cross-section, and the core losses are sensitive to harmonics which may not be so obvious in the case of J. Indeed it is usually sufficient to work with the RMS or effective value of J, but with B we may have to be more careful. The RMS (‘effective’) value of B is not a satisfactory indicator of the core-loss density. The core-losses are also dependent on the core material and lamination thickness, whereas J is usually in a copper conductor and the loss density (Joule loss) is well defined at the basic level. Even when skin effect and proximity effect are significant, we are still working with copper conductors. These comments about B do nothing to diminish the importance of ‘knowing J’, but rather they extend the rule-set for designers to know B and its waveform as well as knowing J.

A higher value of J increases the conductor temperature, and the resistance increases at approximately 0⋅4% per centigrade degree. For a temperature rise of 50°C the resistance increases by about 21%, and this leads to an increase in Joule loss (copper loss) by the same percentage. Thus higher current-density lowers the efficiency, as well as increasing the winding temperature. So if we see a claim that a given motor produces extraordinary power in a small volume, we should always ask about the temperature rise, the method of cooling, and of course J. 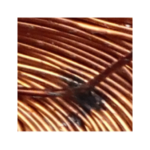