Multiphysics simulations, such as coupled analyses (magnetic field, thermal, structural, electric field), are becoming more widely used in recent years. Driving this trend are magnetically optimized designs for limit design that require the structural integrity and heat to be evaluated simultaneously to make informed decisions about designs, because magnetic field analyses are no longer enough. The integrity of a structure may not be strong enough even if the design is magnetically optimized. The thermal characteristics also need to be examined in detail to handle the heat produced by miniaturization. The ongoing advancements in technology for multiphysics software such as JMAG is supporting this trend by providing multiphysics simulations that are easy to use and highly accurate.
There are two types of technology vital to realizing multiphysics simulations are material modeling and mapping technology. As previous technical reports have shown, simulation software needs to be able to account for the temperature and stress dependency. Models that account for the temperature and stress dependency of the magnetic and loss properties can be specified in the material data of JMAG. One example is the variations in the temperature distribution accounting for the demagnetization curve of permanent magnets that includes the thermal demagnetization. Mapping technology maps the temperature and stress information as the input for the material model of different types of analyses. This edition of the Technical report focuses on the JMAG mapping technology.

Mapping can be used to “map” the loss distribution obtained in a magnetic field analysis as the heat source distribution in a thermal analysis. Mapping can be broken into two major categories, spatial mapping and time mapping. In addition, the spatial resolution (mesh/geometry) and time resolution (time interval) of each model differs between analyses. JMAG is composed of an gversatile meshing” feature that can map the physical properties to models that have differing spatial and time resolution.

The mapping technology in JMAG maps the physical properties between mesh that have different resolutions. For example, the density of the mesh required to perform an accurate magnetic field analysis and an accurate structural analysis is different. Mapping in JMAG is performed by interpolating the physical properties of mesh in models that have different resolutions. JMAG allows the user to generate mesh specific to each analysis to achieve sufficient accuracy when running a coupled analysis.
JMAG’s mapping technology can also map physical properties between models in different dimensions. Magnetic field analyses of motors are usually performed using a 2D model. However, 3D models are often used for thermal and structural analyses. JMAG can expand the loss distribution obtained for a 2D model in the axial direction to map onto a 3D model. The physical properties obtained for a 3D model can also be mapped onto a 2D model by specifying a cross-section. 3D models that are unnecessary for one type of analysis no longer need to be created to simply match the dimension of another type of analyses.

The time scale for the phenomena in the magnetic field analysis is not the same as the phenomena in the thermal analysis. JMAG is capable of mapping the physical properties even if the time scales are different. When a coupled analysis is performed for transient phenomena, the weight of the calculations increases if the time interval is small. JMAG treats phenomena with a small time scale as phenomena at a steady state. The results for one period are averaged, and then mapped in the analyses consisting of phenomena that have a larger time scale. In a coupled magnetic field and structural analysis (frequency response analysis), the electromagnetic force obtained in the transient analysis can be converted by FFT and mapped to a model for a structural analysis. 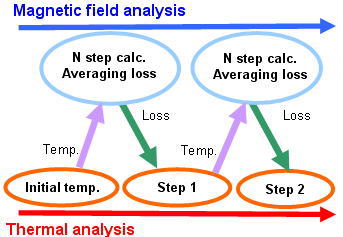 The majority of this Technical Report has focused on coupled analyses in JMAG, but information for the physical properties in JMAG is compatible with a variety of 3rd party software. JMAG’s structural analysis is compatible with NASTRAN data. A NASTRAN input file that accounts for the electromagnetic force distribution obtained in JMAG can be exported using the mapping feature. Linking to 3rd party software is fundamental to the development concepts behind JMAG, as our product policy of providing an open interface demonstrates.
This edition of the Technical Report has described the mapping technology as part of physical modeling. JMAG supports magnetic field analysis, thermal analysis, structural analysis, and electric field analysis providing a set of features to enrich these simulations. I look forward to introducing more of these features in future technical reports. 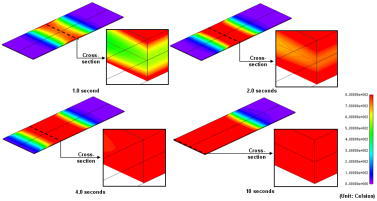 The next edition of the Technical Report will introduce circuit/control modeling.