These technical reports introduce the scope of JMAG’s technological development. The final edition for this series provides a deeper look at JMAG’s modeling technology.

Ideal MBD and Its Challenges

Model based design (MBD) has been around the field of circuits/controls for motors for a long time, but has not been at the forefront for some time. However, MBD allows the control algorithms to be evaluated with simulations before a prototype is built by utilizing a model that can accurately simulate the behavior of motors. The necessity for an MBD development method is reinforced by limit design and the stricter time allotted for product development.
The demand to bring a product to market as quickly as possible has prompted the separate processes of motor design and circuit/control design to be undertaken simultaneously. Products designed in a V-type workflow that utilizes simulations can be achieved by employing MBD. The affects of magnetic saturation and spatial harmonics on the control algorithm of motors as miniaturization and high output advance cannot be ignored. On the other hand, the development of sensorless controls utilizing magnetic saturation and saliency demands a deep understanding of the motor behavior.
Several hurdles need to be overcome to implement MBD in a development process that requires more versatility to satisfy the stricter demands of product development. An optimal tool to provide motor designers and circuit/control designers with the capability of evaluating different types of models simultaneously is necessary in the design process. This type of tool also needs to provide the highest level of accuracy. A simple linear model is not sufficient to analyze control algorithms because the behavior of motors becomes more nonlinear depending on the drive conditions.

The behavior of motors that are heavily loaded or driven at high rotation speeds is complex. JMAG can accurately obtain these kinds of complex phenomena utilizing technology centered on finite element analysis (FEA). The losses of motors rotating at high speeds, such as iron loss, cannot be ignored. The inductance of motors also decreases as the magnetic saturation increases, and the affects of slot harmonics on motors is vital to the back EMF waveform necessary for sensorless control. JMAG offers highly accurate analyses to engineers which provides valuable insight to phenomena important to motor design.
However, the parameters of the motor models used for control simulations are conventionally based on lumped parameters. For instance, an equivalent circuit for a PM synchronous motor is constructed using the resistance, inductance, and back EMF produced by the magnets. The behavior of motors can be accounted for in control simulations if each of these aspects of the motor is understood. Nonetheless, the complex phenomena described previously requires that the most accurate parameters are expressed in the simulations. Therefore, motor models which combine inductance that accounts for the nonlinear characteristics using a variety of methods, such as lookup tables, to use in control simulations are required. JMAG has progressively evolved to offer this type of cutting-edge modeling technology that is capable of generating motor models for circuit/control simulations from a simulation model used for the motor design. 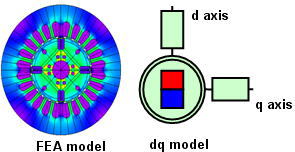 The modeling technology built into JMAG can automatically generate a model specifically for a circuit/control simulation from an FEA model. The most profound aspect of these types of models is the high level of accuracy they provide. There are a wide range of methods for modeling motors specific to circuit/control simulations. The motor modeling technology built into JMAG provides a motor model that satisfies the accuracy that is required while maintaining the time the model is generated.

An LdLq model is generated to include the inductance of a motor from an FEA model. This type of model is based on models that are composed of mathematical equations. However, the inductance of a motor varies with magnetic saturation. The LdLq models generated by JMAG take the magnetic saturation into account. Even though this is a conventional type of model, the accuracy of the parameters increases based on the analyses capabilities of JMAG.

A JMAG-RT model is a behavior model generated from an FEA model. The model is based on the same principles as the LdLq model, but the JMAG-RT model enhances the accuracy by not only accounting for the nonlinear characteristics of the motor but also the effects of the spatial harmonics.
The models described in (b) and (c) based on the conventionally classic type of model reduce the time required for a circuit/control simulation when compared to the model described in (a) while enhancing the accuracy of the parameters.

Why a Motor Model Based on FEA is Necessary

This technical report has described why a highly accurate motor model is important, but why does this type of model need to be generated from a JMAG model (FEA model)?
First is the accuracy. The magnetic field analysis based on the finite element method JMAG provides is becoming indispensable in the motor design process. The analysis technology built into JMAG accurately visualizes the complex motor behavior required by motor designs. MBD cannot be realized of course if the evaluation of motors in a circuit/control analysis is not equally as accurate. This means that the accuracy of the model that is generated directly corresponds to the accuracy of the motor model.
I would also like to touch on safety, even though it is not directly related to the motor model itself. The control algorithm is tested using a prototype under various drive conditions. Tests, such as the maximum rotation speed as well as the robustness of the motor when operating abnormally, such as short circuits, involve a certain degree of danger that increases the costs that are incurred. MBD can reduce the danger and the cost that are incurred via simulation even though a behavior of a motor operating abnormally diverges largely from the steady state. The accuracy is also indispensable to evaluate a motor operating abnormally. Therefore, a highly accurate motor model is required to maintain a high level of safety.
The same motor model generated from an FEA model can be used for both the motor design and circuit/control design. This type of model opens a dialog between the motor designer and circuit/control designer through MBD, providing a tool that can not only be used for analysis, but also a communication. The motor design and circuit/control design required to develop products are connected by the motor model generated by JMAG as well as JMAG itself. 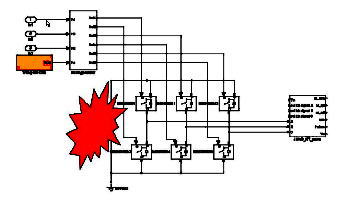 Technology to generate motor models is required for MBD, but the trade off between the time required for calculation and the accuracy needs to be overcome to reap the benefits MBD provides. JMAG is capable of generating several different types of motor models to address this issue. JMAG also provides technology to circumvent the disadvantages that come with using each type of model.
The biggest problem with using a model that is directly linked to FEA and the circuit/control simulator is the time that is required. This is caused by performing the FEA calculation using the time intervals for the circuit/control simulation. The FEA and circuit/control simulation can be handled independently by utilizing the subcycling feature in JMAG. The time required for calculation is drastically reduced by adjusting the time interval for the differing time scale of each phenomenon occurring in the motor and the control.
The time required to generate an LdLq model or JMAG-RT model can also be a problem. The distributed processing system can be used to address this issue. The characteristics for these types of models are composed of a wide range of motor parameters at various drive states requiring multiple calculations to be performed. These calculations can be distributed to multiple computers because each of the calculations can be performed independently. Distributed processing that reduces the burden on each computer is quickly becoming a standard in the industry.
The high speed solver that was introduced in a previous technical report also reduces the time required to generate each type of model.

The system of a product is often analyzed at an early stage of development using Hardware in the Loop (HILS) for MBD. JMAG also supports the generation of motor models that can be used in HILS as a results of JSOL’s active collaboration with companies developing real time simulators such as DSP Technology and Opal-RT. In the future, JMAG will continue to strive to support an even wider range of simulators that are on the market today.

Enhanced simulation tools are the most vital to support MBD in becoming accessible to a wide range of users. The motor model will certainly be at the heart of these innovations. The technology to generate motor models in JMAG not only provides a highly accurate model, but efficiently unites the motor and circuit/control design processes. New as well as improved features will continue to be implemented into JMAG to provide analysis technology that can be used for a wide range of applications.

This is the final technical report of this series. These technical reports have introduced the calculation engine, the mesh generation engine, the material and physical modeling, and the circuit/control modeling that is fundamental to the JMAG analysis technology. JMAG will continue to be developed as the simulation tool for electromechanical design. In the future, we look forward to introducing more about the analysis technologies implemented into JMAG from many different perspectives. 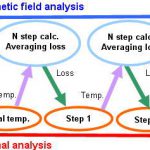