Using a merger with Schneider Electric S.A. and making the leap to become aleading company in the electromagnetic switch market 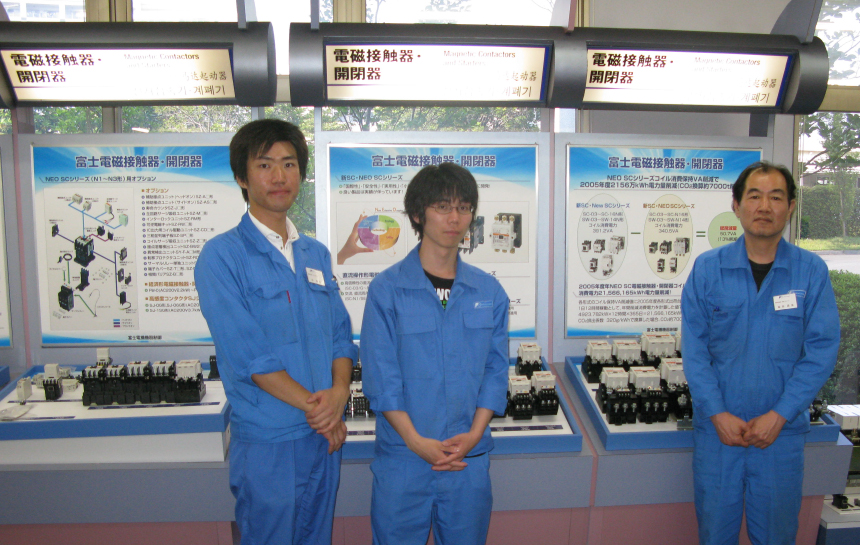 Fuji Electric FA Components & Systems Co., Ltd. is the leader in control instruments, such as electromagnetic switches that use electromagnets to open and close the contact points of electrical circuits.
In 2008 they merged with the Japanese arm of Schneider Electric S.A., the second largest manufacturer in the same field. By merging the former Fuji Electric, the market leader in Japan, with the former Schneider, who provides the know-how of a global company, they are leading the market with a combination of global product power and solution proposals that have high added value. They are using “JMAG”, JSOL’s electromagnetic field analysis software, at their development site. We asked Mr. Masayoshi Sakata, the manager of the development and technical analysis group at Fuji Electric’s technology and development headquarters and the driving force behind utilizing simulation, about how he uses JMAG.

The words “FA Components” appear in the name of your company. What do they mean and exactly what role do they play in your company?

Mr. Sakata
The company’s business fields are broken up into two main parts. There is the “Control instrument” field, for things like magnetic switches and operation displays, and there is the “Receiving and distributing instrument” field, which is for things like molded case circuit breakers and earth leakage circuit breakers.
To be precise, we operate with the assumption that it is a relay instrument, and then develop and produce the fuses and switches necessary for four types of things: 1. Molded case circuit breakers and earth leakage circuit breakers, 2. Electromagnetic switches and electromagnetic contactors, 3. Switches and sensors for all types of operation equipment as well as control relays, and 4. High voltage reception and distribution of electricity.
Getting a little more into detail, the device that opens up or closes off the flow of electricity (electrical circuit) when the circuit or electrical equipment is behaving normally is called the Switch. The electrical instrument that outputs an electrical signal for control in response to the switch or electrical equipment’s condition is called the Relay. The instrument that is coupled to the electric relay and shuts off the current when an unexpectedly excessive load current hits the circuit, potentially causing considerable damage to the facility, is called the Breaker. The device that combines the apparatus (the electromagnetic contactor), which uses an electromagnet to open and close the circuit, with the Breaker is the Electromagnetic Switch.
Our company develops and manufactures switches and breakers used in factories and buildings in addition to electric switches for electric motor circuits for clients that range from transformer stations on the power grid to the consumer side.

What led you to implement the electromagnetic field analysis software “JMAG?”

Mr. Sakata
At the Fuji Electric Group we have been using JMAG for some time for motor design and analysis. Here at the Fukiage factory we had been using a different analysis software, but it was hard to operate so the interface was not at a level that allowed the developers to use it easily. While not limited to our own field, there is an unavoidable trend toward products that are smaller and save both power and energy. For that reason utilization of simulation methods is indispensible. Using simulation software with a good interface was an urgent issue.
At the company I have been involved with the structures of several various simulation techniques, but in 2007 I took the step of implementing JMAG to go along with my transfer to the Fukiage factory in Saitama Prefecture. My transfer itself was intended to spread the use of simulation techniques at the development and design sites, and the software that had an easy-to-use interface that would answer to those expectations was JMAG.

A versatile simulation range because it uses electromagnets

When developing a switch, what kinds of parts do you use electromagnetic field analysis software on?

In other words, could you say that electromagnetic field analysis plays an important role in choosing materials and circuit design when developing and designing electromagnetic switches?

Mr. Sakata
Exactly. For example, we do simulations on things like, what kind of magnetic force would be good to generate in order to make the contact part move more smoothly and what kind of involvement it will have.
When a current surge is produced, the contact part of the electromagnetic contactor opens immediately with a strong repulsive force, but it is vital to have a structure design and a wiring design that allow this power to be used in a way that produces a smooth movement.
And when the current is cut off a discharge arc gets produced, so we repeat simulations where we set up various trial arcs and use the arc’s power instead of just clarifying its generation mechanisms. 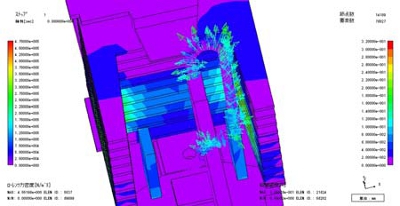 JMAG is a tool for more than just motor related analysis

There is a full variety of examples of usage.

Mr. Sakata
There really are a lot of ways to use it, aren’t there. (Laughs) For example, if you take several small electromagnetic switches and line them up, when you use them they cause magnetic interference, so we do that simulation and we look for magnetic changes that produce vibrations in the equipment, as well.
First we make several dozen patterns of the basic shape, and then we use JMAG for designs of the detailed parts beyond that. We use it for applied analysis of the structure, too.
I had thought that JMAG was specialized for motor types of electromagnetic field analysis, but, and pardon my rudeness here, I realized that it is a surprisingly easy to use and powerful tool for the electromagnetic switch field, as well.
People take it for granted that products in the class of devices that we develop and manufacture are used over long periods of time, ten or twenty years. That is why we perform endurance tests like repeatedly opening and closing them about 10 million times over a period of six to twelve months before we start mass production. This is precisely the reason that we cannot make the step to mass production without properly resolving various issues. That is the background behind the reason that JMAG has become an indispensible part of our worksite.

You are using “JMAG-Designer,” the new version of JMAG, at Fuji Electric, so we would like to hear your impressions of it so far.

Mr. Sakata
The analysis supervisor takes care of the final detailed analysis and confirmation, but I feel that JMAG-Designer is getting easier and easier to use for those who are doing the designs In March of 2011, we used the upgrade to JMAG-Designer as an opportunity to hold an in-house study session targeting the designers, and all of the designers who had not been using JMAG until now got to be able to use it. You can really understand its strengths.
It has gotten to where it can handle CAD data and it is also possible to do both direct and geometric changes on the mesh model and obtain analysis results, so I think that the number of users will most likely increase further. However, I would be grateful if there were functions that allowed me to confirm the direction visually and not just numerically. 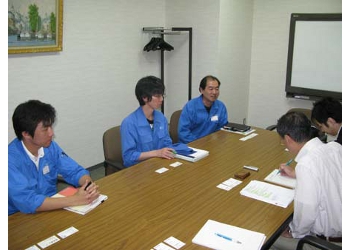 Encouraging the ability to search for further reasons with simulation software

In closing, tell us any tricks of your own that you have for using JMAG.

Mr. Sakata
There are not many people who can get a clear mental picture of a 3-D image from 2-D data, but thanks to the appearance of the 3-D CAD the threshold for designing while trying to think of a 3-D image has gotten quite low.
However, on the other hand if one designs in 3-D things progress automatically right until the actual figure, so the understanding of why it comes out in the way that it does, a basic point, is still weak. I think that simulation software has the effect of promoting understanding regarding this basic point by presenting validity through analysis.
To put it a different way, an answer comes out even if a person inputs the wrong numerical values, so by doing various simulations the designer thinks, “Why is it coming out like this?” and we have to teach the ability to be able to nail down the logic for things to turn out like that. This consists of nothing other than an increase in a person’s ability as a designer. You could even call it a “Tool for the trial and error method.” However, in order to do trial and error one needs the ability, not having the fear of failure, to do trial and error. 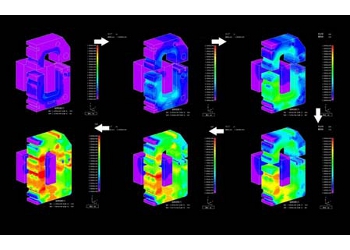 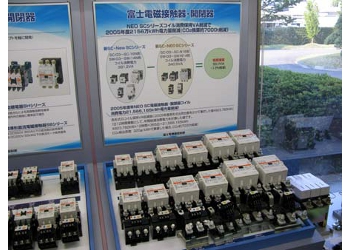 Company name:
Fuji Electric FA Components & Systems Co., Ltd.
Stablished:
10/01/2008
Location:
Mitsui Sumitomo Bank Ningyo-cho Bldg., 5-7,
Nihonbashi Odemma-cho, Chuo-ku, Tokyo, JAPAN
Capital:
7,600,000,000 Yen
Consolidated Number of Employees:
260
President:
Fumio Ito
Business Overview:
Fuji Electric was established in 1923 through both a capital and technical alliance between Furukawa Electric Co., Ltd. and the German company Siemens. In 1935 a company called Fuji Communications Instrument Manufacturers was set up after growing independent of the phone department and became the current company Fujitsu.
Fuji Electric Group was transferred to the holdings company system in October of 2003, and because of that, Fuji Electric FA Components and Systems Co., Ltd was established as the core business of the Equipment and Control Department. After that in 2008 they had a merger with the Japanese arm of the French Company Schneider, the world’s second largest company in the electric receiving and distribution instrument business, and became the new Fuji Electric. In name as well as in reality they are Japan’s leading company in the electric receiving and distribution instrument field as well as the control instruments field.
They have three manufacturing bases in Japan, at Fukiage (Saitama Prefecture, Kounosu City), Ohtawara (Tochigi Prefecture, Ohtawara City), and Chichibu Fuji (Saitama Prefecture, Chichibu Gun Ogano Machi).
Business Activities:
Electric receiving and distribution instruments Development, production, sales, and services of regulation instruments.
URL:
https://www.fujielectric.co.jp/fcs/