DC-DC converters such as flyback converters control current of primary / secondary winding with switch operation, and transmit electrical power on the load side using diodes and condensers. Depending on its application, there is a need to satisfy current voltage characteristics but it is affected by magnetic saturation and skin effect. To accurately evaluate current voltage characteristics, it will be important to specifically account for the impact of skin effects and proximity effects, as well as leakage flux from the core gap. Especially for high switching frequencies, it will be necessary to control alternating resistance occurring in the winding due to switch period, and to accurately evaluate alternating resistance to design converters with low loss.
Magnetic field analysis using the finite element method is effective for accurate analyses of magnetic saturation and alternating resistance. By coupling external circuits and magnetic field analysis running switching, the current voltage characteristics of the converter can be obtained.
In this example, this case study obtains the current waveform of the primary / secondary winding and the core magnetic flux density distribution, current density distribution inside the winding, joule loss density distribution at each time when the voltage is applied. 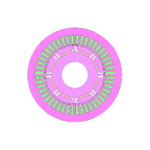