[JAC146] Analysis of Stray Loss in a Transformer

Transformers are made to be used long-term, so it has become an important design policy to control running costs from losses. These losses include copper loss in the coil and iron loss in the core. In high-capacity transformers, however, there is also stray loss in the tank from flux leakage from the core. From a safety standpoint, companies want to contain the heat produced from stray losses in the tank to well below the standards required for heat resistant design because they anticipate injuries from people touching the tank itself.
Predicting these losses and the heat that they generate is a vital component of transformer design, but it is difficult to estimate them from desktop calculations, so evaluations and detailed analyses using the finite element method (FEM) are indispensible.
This Application Note explains how to obtain losses in a transformer tank and use them to evaluate the temperature distribution in each part.

Fig. 4 shows the iron loss density distribution in the core. From fig. 4, it is apparent that iron losses increase in the inside corners. This is caused by the flow of magnet flux concentrating on the shortest path through the magnetic circuit.

Fig. 5 and Fig. 6 shows the losses in each part. Use these loss values as heat sources to run the thermal analysis. 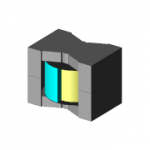