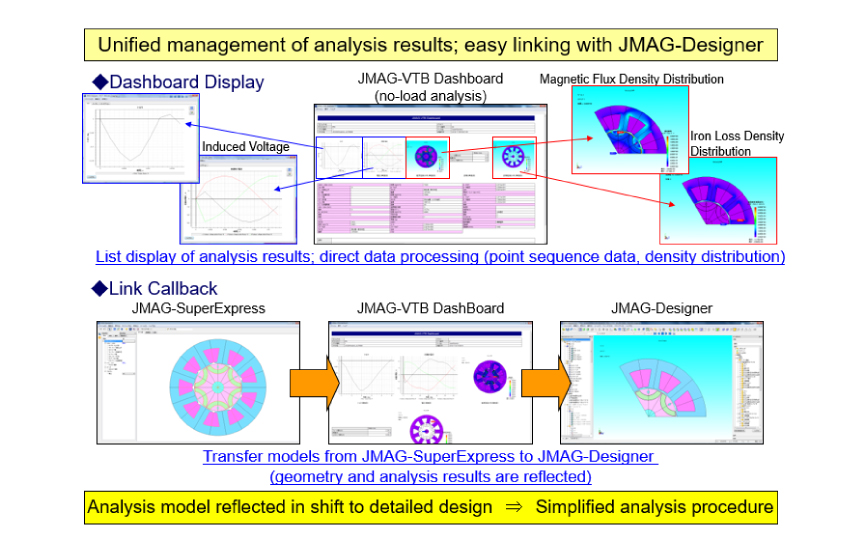 Lighter, thinner, shorter and smaller, yet highly functional. Motors promote evolution of household appliances and bring about their own evolutions. Evolution that is now starting an original approach to car and industrial-use parts. JMAG has supported research and development. Dr. Michihiro Kurokawa and Dr. Yukihiro Okada, who are in charge of research and development for major household appliances, products for cars and industrial use items at Panasonic Corporation talked to us about using JMAG in product development.

It’s a case of “Now that you mention it, you’re right” but when you think about it, there are actually a lot of motors used in household appliances.

Dr. Kurokawa:
Just to give you a rough list of the many products using motors, there are air conditioners, washing machines, vacuum cleaners, refrigerators, fans, dishwashers, air purification systems, DVD and Blu-Ray disk players, digital cameras, faxes, hair dryers, shavers and on and on and on. They’ve all got motors.
Panasonic started its motor business in 1933, which was 15 years after the establishment of Matsushita Electric Industrial Co., Ltd., so 2013 marks its 80th anniversary. At that time, our founder Konosuke Matsushita made the following prediction when he established the electrical machinery division: “In the future, as cultural lifestyle evolves, each house will use at least 10 motors.” Actually, use has clearly surpassed that prediction.

Is there a wide variety of research and development of motors going on within the Motor Development Center in the Appliance Company’s technology headquarters?

Dr. Kurokawa:
No, actually. The Motor Development Center is a research and development section for the Appliance Company’s motor business division and it takes charge of research and development of motors in household-use air-conditioners, washing machines and refrigerators. It is also engaged in R&D for brushless motors and motor system products targeting automakers for use in cars, as well as specializing in brushless motors for items such as servo motors or amplifiers or production machinery use in industrial fields.
As a technical field, we take charge of magnetic circuit design, control system development and material development of things such as magnets or mold materials. We handle materials but we are also involved in production technologies, such as the production process or manufacturing equipment.

What are your thoughts about bringing out a typically Panasonic feel to your motor business?

Dr. Kurokawa:
Our company’s business centers on motors for household appliance use, so we have developed small and highly efficient motors. This is basically the same for motors to be used in the in-vehicle field or industrial field. In the future, there will definitely be more motors used than there are now in households as in the in-vehicle field, to give an example, as HV and EV become more popular.
In development and applicability of in-vehicle motors, ideas and cost power nurtured as a household manufacturer closely resembled ideas and cost power when approached from the car side, even though they are different. As a household appliance manufacturer we have naturally taken the approach of looking to make things lighter, thinner, shorter and smaller.

How are you currently using JMAG?

Dr. Kurokawa:
Our center mainly uses it with development of prototype models. What this means is that we do verification checks on motor products so that we can make them practically applicable in a shorter span of time.
At the moment, household appliance products are currently upgraded every year normally, or two years at the most, so JMAG is indispensable for shortening the product development period. With in-vehicle parts, we adjust to automakers’ minor changes, while with industrial-use items the development period is from three to five years.
While this product upgrading is going on we are also facing challenges from competitors involved in CAE manufacturing, so we need to be able to differentiate and ultimately tie in our efforts toward being commercially competitive.

Is JMAG’s contribution to your manufacturing system good enough?

Dr. Kurokawa:
Of course! An extremely vital issue is the matter of friction between motors built as prototypes and control systems. For example, say you’ve got a motor for industrial use and you need it to provide rapid response and high-accuracy positioning. When you need to verify that amplifiers and motor controls match for conflicting matters such as stability and high-speed responses, you can’t go without a JMAG simulation.

Dr. Okada:
Even with an electromagnetic field Finite Element Analysis (FEA) we used to do analyses using geometry defined on spreadsheet software, but now we can simply use the CAD data and analyze it as is, which drastically reduces the time needed for examining principles or verifying designs. JMAG’s FEA response and analysis capabilities have improved and, on a 2D-model, we can get results in a very short time.

We’ve heard you’re using QSD with analysis. Please tell us more about that.

Dr. Kurokawa:
At Panasonic, we deploy and promote the use of Quality Stabilization Design (QSD) in design process. QSD takes the global standard Taguchi Method and evolves it to add a Panasonic-style to create an optimization testing technology. We are combining QSD and CAE to use in development. For example, for development of a particular motor, we’ll start an analysis prepared with anywhere from nine to 16 design parameter items until ultimately whittling that down to about two items needed for product specifications.
One of our recent topics was using JMAG-Express Powermode and QSD for optimization design and increasing efficiency in an IPM motor while using a ferrite magnet instead of a rare earth magnet. It goes without saying that ferrite magnets’ residual magnetic flux is only about 1/3rd that of rare earth magnets, but we used JMAG-Express Powermode to optimize a concentrated winding magnet torque and reluctance torque ratio.

First we performed a concept design on JMAG-Express, then followed up with a basic design on JMAG-Express Powermode and went on to a detailed design in JMAG-Designer in what was a seamless analysis.
In this development case we used tests from the L18 orthogonal table as the design parameters. That is, we could perform the same test with the minimum arrangements as we could with putting everything into play. Consequently, by designing a ferrite magnet motor with well-balanced loss we could check how to come ahead on functionality and costs.

How has JMAG been for cutting down analysis time?

Can you tell us how you came about implementing JMAG?

Dr. Kurokawa:
JMAG has, ever since it was launched, specialized in motors and is equipped with a variety of functions so we didn’t think twice about using it. As far as I can recall, we first used it in about 1996 for development of a motor used in air-conditioning.
We originally used an in-house analysis software, but we heard about this software that specialized in motors, so we set it up in a laboratory at first and used it with a focus on analysis. JMAG’s effectiveness was quickly recognized and in 2000 we installed it in the business division and began using it with magnetic field analyses while packed together with 3D-CAD.

What aspects of JMAG do you value most?

Dr. Kurokawa:
I most commonly hear that it’s easy to use. And there is plenty of support even with automation of such things as coupling with 3D-CAD and this helps tremendously.

Dr. Okada:
I think an overwhelming capability is the intuitive view of magnetic flux density in a magnetic field. As soon as you evaluate several sets of results, you can change designs and change materials. We’re really grateful to have these intuitive types of functions.
Stress calculation or interface improvements were incorporated early and it’s extraordinarily user-friendly, which I think is the reason for our continued use. We’re extremely grateful that it’s response is so fast, particularly concerning inquiries about analysis.
Adding JMAG’s material database to our company’s own database to create tremendous original development strength is another reason why it’s so well-received within our company, too.

Is your ultimate aim to be able to avoid having to use prototypes?

Dr. Kurokawa:
Hmm. That’s a hard one. Testing and verification work naturally involves verifying designs, but there is also a variety of other verifications carried out, including those related to production conditions. I think that with existing technologies it’s impossible to avoid making a prototype. If we make prototype-free production our ultimate goal, it will probably need a faster CAE environment and a different perspective.

Dr. Okada:
Going prototype-free is an ideal, but errors arising when assembling prototypes is an unavoidable issue. Actually, it’s a fact that (making a prototype) can show whether calculation results are precise or a little bit askew.
Therefore, perhaps a better way to phrase our goal would be that we use JMAG to get closer to reality. For example, just by being able to visualize motor behavior in a PWM control makes the benefits JMAG bestows to be significant.

I think JMAG is probably the closest thing around to offering multiphysics support.

Please tell us if you have any requests regarding JMAG functions.

Dr. Kurokawa:
I guess it would have to be support for multiphysics. Friction, shock, stress, fluid, light, electrons, thermal, electrical field, magnetic field, chemical reaction and so on. I don’t think it’s an exaggeration to say that manufacturing is already in a state where it’s not possible to get as far as producing revolutionary technology without a background of analyzing the multiphysics phenomenon process. We’re waiting for the emergence of a comprehensive simulation software.
I believe that JMAG is the closest to being able to do this. We talked about development of an IPM motor using a ferrite magnet. Various JMAG software couples extremely smoothly and seamlessly. These properties can form the basis for multiphysics support and I get the feeling they make it easier for multiphysics to become a reality.

Dr. Okada:
Say you asked: “We’re making this function, what should we develop with a focus on motor properties?” I think JMAG is extremely effective for responding to this question, so it could expand its role from being a simple analysis tool to a design tool.

What are the next targets for the Motor Development Center?

Dr. Kurokawa:
As with the Panasonic group business policy, we want to strengthen our business with corporate clients, doing so with the addition of in-vehicle products in addition to our household appliance field. With in-vehicle or industrial use, there are in every field numerous technical issues related to requirements for motors different to those confronting household appliances, like environmental durability, noise and miniaturization. On the other hand, you could also say there is a great deal of room left for development. This is what we’re focusing on.
For example, in the in-vehicle field we could add our company’s strength of audio-visual products and get real about involvement in core parts related to driving or safety, like batteries or devices, which could be given as a goal for expanding business greatly. And you would have to give better development speed to further enhance quality and customer satisfaction.
Currently, JMAG is undoubtedly an indispensable tool for solutions to new motor-related technical issues and rapid development. That’s why we want to continue actively seeking functions needed for solutions.

Company name:
Panasonic Corporation
Representative:
President and Director Kazuhiro Tsuga
Head office:
City of Kadoma, Osaka Prefecture
Capital:
258.7 billion yen (As of March 31, 2013)
Consolidated sales:
7.3 trillion yen (As of March, 2013)
Consolidated number of employees:
293,742 (As of March 31, 2013)
No. of affiliates:
538 (As of March 31, 2013)
Panasonic Corporation, Appliances Company:
Appliances Company is an internal company that takes charge of Panasonic’s appliance field, including its household appliances and cold chain. The Motor Development Center is one of our device business and works centered on highly efficient brushless motors for the three fields of household, in-vehicle and industrial use.
URL:
https://panasonic.co.jp/ap/