Examining the eddy currents that occur in the magnets of motors has required a significant amount of time because analyses using a three-dimensional model has been required. The high-speed magnet loss calculation of rotation machines provides the fastest possible analysis.
Conventional methods to calculate the eddy current loss of magnets that require 8 hours can now be run in approximately 12 minutes.

Eddy current loss by each number of magnet divisions

The magnetic flux density distribution and flux lines that isolate the factors making up the phenomena can be evaluated by fixing the magnetic properties of materials in a specific state using the frozen permeability condition to analyze a model.
Isolated Torque 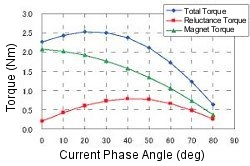 The time period explicit error correction method uses the temporal periodicity of the varying field in the magnetic field analysis. It shortens the transient period that occurs in a transient analysis, and forces the model into steady state operation in fewer time steps than if the model were allowed to achieve steady state operation on its own. This function is effective for models with an electric potential (voltage) source for circuits. It is also effective for models that require substantial analysis time (analysis steps) before reaching steady state. JMAG’s unique technology has been built into this function, so it can be applied to almost all problems with time varying fields.
As an example, an induction motor analysis could require up to 10 time periods before transitioning to steady state operation. If the goal is to observe steady state operation, then these 10 periods are not necessary. In this case, adopting the time period control method would facilitate a reduction in analysis by reducing the transient period.
It is possible to reduce analysis time even further by combining the time period method with the traditional approximate steady state method.

A comparison of steady torque convergence when applying and not applying the time period explicit error correction method in induction motor analysis.

A second example of the time period method involves the analysis of a transformer for a switching power supply. In this case the capacitance of the secondary smoothing capacitor determines the system?fs time constant. This could lead to an extremely large time constant and thus a long analysis time before reaching steady state operation. By using the time period explicit error correction method, it is possible to considerably shorten the analysis time.

Time period explicit error correction method in analysis of a transformer for switching power supply A comparison of convergence for steady current when applying and not applying the method.