Problems associated with power transformers are not only related to design matters such as satisfying basic characteristics, but also includes many issues related to testing and maintenance. For example, magnetic flux leakage accompanying increased capacity causes localized stray loss in the tank. A coil’s dielectric strength needs to be verified by a local maximum electric field. The part arrangement between core and coil or magnetic flux distribution also has an effect on vibration caused by the electromagnetic force.
JMAG enables the visualization of the phenomena and ease in moving forward with analyzing causes. It also makes possible quantitative evaluations of temperature rising inside objects or noise where measurement is difficult.

Stray Loss in the Iron Core

The following illustration shows the loss distribution of the iron core in a short circuit test. It can be observed that the leakage flux from the coil end enters perpendicularly to the plane of the steel sheet resulting in eddy currents generated on its surface. This leakage flux causes local heat generation during operation. By applying anisotropy to magnetic properties and electric conductivity, the behavior of magnetic flux and eddy currents in the laminated iron core can be correctly captured.

Iron Loss Distribution in the Core

Transformer cores sometimes use anisotropic materials which have different material properties in different directions. In a laminated iron core transformer, material isotropy has an impact on losses. In this example, the transformer has a V-notch to join the different leg and yoke components. The analysis shows that iron losses concentrate at these intersections.

Iron Loss Distribution in the Core

Not only confirms iron loss distribution generated in a core geometry, but also capable of separating hysteresis loss and joule loss making up iron loss to evaluate the contribution of each.

By getting an accurate grasp of the magnetic flux leakage difficult to evaluate in a magnetic circuit, it becomes possible to evaluate stray loss generated in a tank wall. Examining the loss distribution enables design taking into account the optimal positioning relationship between the tank and transformer.

Automatically generates a layer mesh for thin items like the tank or shield plate.

Simplifies complicated geometries such as those for a step lap core.

Evaluates insulation durability in the transformer, including the coil, from localized electric field distribution.

Evaluates temperature distribution in places like the core and tank walls through a thermal analysis using core iron loss, coil copper loss and tank stray loss as a heat source.

Runs a temperature evaluation using iron, copper and stray loss generated in each part as a heat source generation.

Analyzing both vibrations caused by the electromagnetic force and magnetostrictive force enables the contribution of comparisons.

Evaluating Electromagnetic Force in the Coil

Transient current generated when applying power generates significant Lorentz force in the coil. It is possible to give a predicted evaluation of the localized wear in the insulating film.

Calculates Lorentz force applied to the currentflowing through a coil and electromagnetic force on a core.

[W-SE-94] Improving Automatic Mesh Generation Speed for 3D Solid Models
Magnetic field simulation tends to be run as a large-scale analysis lately, being backed by the remarkable performance improvement of the computer. JMAG features a high-performance parallel solver in response to the need to perform a large-scale ana…
9 Sep 2022

[W-MA-100] Introducing the Detailed Analysis Method for Electromagnetic Steel Sheet for High-Precision Loss-Assessment
Here, we use a simple example and consider the significance of taking into account the eddy currents and magnetic hysteresis during magnetic field analysis.
17 Jun 2022 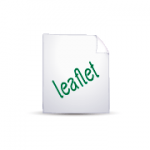 [L-SE-163] High Performance Massive Case Calculations
OverviewTo further improve the performance of electro-mechanical machine, which has many requirements, it is necessary to evaluate in detail many design factors or combinations, such as dimensions and drive conditions, starting from the existing des…
9 May 2022 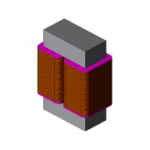 [W-SE-99] High Speed Magnetic Field Analysis with SMP Solver
The parallel solver is one way to run magnetic field analysis at high speed. JMAG has an SMP-parallel solver that can easily be used with a single click on the computer.
28 Apr 2022 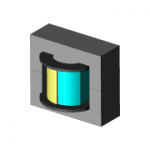 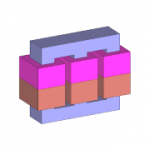 [JAC032] Analysis of a Transformer
In this example, the use of a magnetic field analysis to evaluate changes in the secondary voltage caused by load variations in a low frequency transformer.
28 Apr 2021