Taking on Research for New Motors and Generators 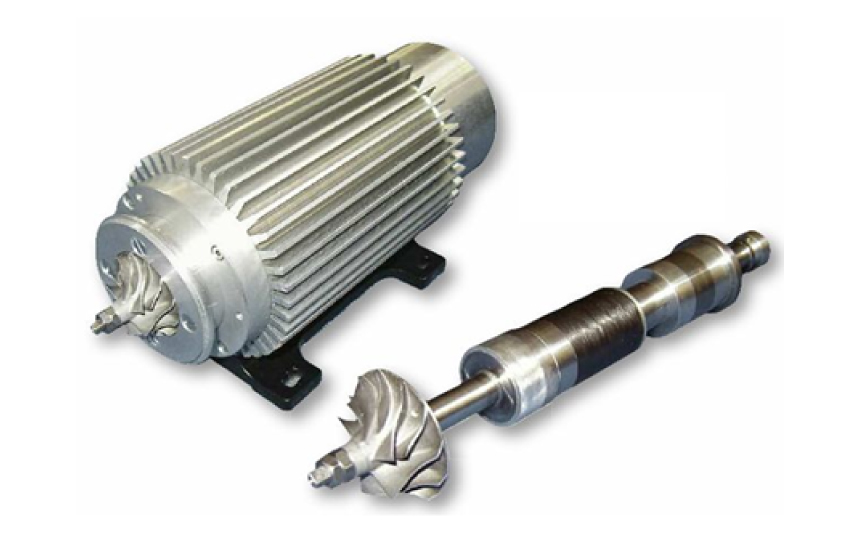 This edition of Implementing JMAG is brought by the Institute for Electrical Energy Conversion, Technische Universität Darmstadt in Germany.
Technische Universität Darmstadt has a long history, having been established in 1877, and is a central figure in German motor and generator research. The Institute for Electrical Energy Conversion uses JMAG to design cutting edge generators.
Mr. Bogan Funieru reported about problems with motors and generators, his vision for the future, and the role that JMAG is playing in his research.

The now named Institute for Electrical Energy Conversion was founded in 1920. Then, the world wide first university electrical engineering chair, founded in 1882 by Prof. Dr.phil.Dr-Ing.E.h. Erasmus Kittler, was split in the Institute of Electrical Machines and the High-Voltage Institute. The Institute is headed in the present by Prof. Dr.-Ing. habil. Dr.h.c. Andreas Binder who has now 15 scientific assistants: 14 ph.D. students and one post-doctoral assistant. A high proportion of the institute research projects are done in cooperation with Industry partners, parallel to some government founded projects. A big emphasis is put on the experimental testing of the designed motors and drive systems. For this purpose a lab with a total available power supply of 1 MVA is used. The available test rigs allow testing of machines up to 250 kW and it is as well possible to have sinus rotating convertors up to 40 kVA / 800 Hz and high voltage testing up to 250 kVA / 6 kV. For prototyping of electrical machines up to about 100 kW a workshop with four qualified electrical and mechanical workers is available.
The main goal of our research activity is the electrical machines design and optimization. Along with the standard induction and synchronous machines, also some special designs like motors with magnetically levitated rotor and linear drives are studied. Nowadays, the electrical machines cannot be optimized alone, being fully integrated with the power electronic current or voltage source and the mechanical system they drive. That means that for each application the whole drive system has to be optimized, and we cannot focus just on the machine. For this reason also the control of motors by the power electronic inverter, the mechanical connection components with or without gearbox and also special motor designs with integrated machine components are of great interest. Furthermore, research on the interaction and possible adverse effects between the drive system components is done.

The fundamental points of your developmental research

Because we have a very broad research area I will split the main research directions according to the application field:

For hybrid vehicles and especially electric vehicles the autonomy is an important parameter due to the rather slow battery charging. It is therefore important to consider the whole vehicle including its mass and aerodynamic performance, which together with the efficiency of the drive system components and the battery capacity influences the autonomy. A full vehicle model, which uses simplified analytical models for the different vehicle components and is able to apply different drive cycles to the vehicle, is used to investigate the autonomy and performance.
Furthermore, it is possible for automotive electrical drive systems to use distributed motors like in-wheel motors which free a lot of space in the vehicle interior and allow revolutionary interior configurations. For this kind of machine which has a disk like shape, permanent magnet motors in outer rotor and transversal flux configuration are investigated using finite element method.
Central drive synchronous motors with permanent magnet and electrical rotor excitation are also at the moment investigated with the goal of obtaining a higher power density.

If the mechanical gearbox is omitted, the force generated by the machine is transferred directly to the mechanical load of the motor or the actuator. This way the efficiency is increased and no maintenance is necessary for the gearbox. Some successfully closed projects in this area are: a spherical positioning system for an infrared telescope installed on an airplane, direct drive PM traction motor for high speed trains and linear actuators and motors used for tractive effort boosting for railway locomotives. An active project is concerning direct drive wind generators for power up to 5 MW. For this power range the removal of the gearbox is interesting because the gearbox is expensive and requires intensive maintenance. A low maintenance wind generator is especially for offshore wind turbines interesting, where the maintenance is difficult and expensive.

Along with the direct drive wind generators mentioned earlier, the high speed wind generators represent at the moment the backbone of the wind energy production. Thus analytical and numerical models for the induction generators and doubly fed induction generators are investigated.
Of further interest are also small modular hydro generators in Straight-Flow technology. These modular generators can be used to harvest the energy potential of existing dams without important investment in infrastructure.
Hydro generators that use the tidal energy are another interesting research area. These generators can be installed in the shallow waters in the coast regions that have a significant tidal stream. The generator functions similar to wind generators, but is driven by the flowing water. In this case the construction needs to ensure safe functioning in a very hostile environment as the turbine is submerged in sea water.

High-speed motors can be used to reduce the mass and volume of the drive system. Interesting applications are compressors, and high-speed cutting. In this area we have experience in the bearing less motors, integrated levitated motors for mechatronic pump systems and digital levitation control systems with and without position sensors.

Influence of the inverter switching on electrical machines

For the modern high performance industry motors the highest torque density combined with an excellent efficiency is expected. For servomotors a low torque ripple combined with a high dynamic response is expected. In these research directions investigations are done in designing of high density PM motors with water cooling and tooth coil concentrated winding, in calculation of the additional losses in induction machines for more exact efficiency calculation, increase of the efficiency of the induction machines and control methods for highly saturated PM tooth coil synchronous motors which compensate the motor non-linearity.
Special machines like self-starting line operated synchronous motors, variable impedance induction motors optimized for high starting torque and good efficiency at rated speed are also investigated.

How is JMAG useful for your study and business

For our institute the electromagnetic numerical FEM simulations are an essential part of the electrical machines designing process, which allow detailed investigation of the initial analytically obtained results. For this reason we use few different software codes. Among these codes, JMAG is the newest in our Institute and we are still in a learning phase of the software capabilities as until now we used mostly the electromagnetical solvers and less the rest of the modules. From the user interface point of view I can only commend the JMAG Designer development team for, in my experience, the most user friendly graphical user interface available in an electromagnetical FEM Program. Apart from the user interface, the program features all the necessary electromagnetic simulation types: static, transient and frequency domain solved with state of the art solvers that allow multi-core and multi-processor simulations, thus optimally using the last types of multi-core processors.
It was thus possible that we calculated with JMAG the losses induced in permanent magnets of a PM direct drive wind generator supplied by an inverter with a switching frequency of 2 kHz, which required a time step of about 8 μs. Thus the simulation of 11 time periods required only about a week calculation time on a normal PC, which is acceptable for this rather complicated problem.
It was also possible due to the fast solvers to consider in detail the 3D effects which concern the eddy currents in permanent magnets. The effect of the magnet segmentation was considered with transient 3D models, and important reduction of the eddy current losses of up to 80% was revealed. 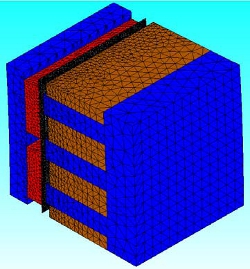 Half segment of 1/5 of the 3D model of direct drive 5MW wind generator,
concentrated winding q = 1/2 with 5 bandage segments in axial direction

Future view of study and business

Along with the active projects that are still running for some years, other interesting research directions are planned for different domains from which I will mention only a few examples.
In automotive industry, along with the traction motors for electric and hybrid vehicles also the auxiliary electrical motors for classical combustion engines are optimized in order to reduce the fuel consumption. Furthermore, many components which are now mechanical driven, like power steering and brake systems, are replaced by electrical motors or actuators, which allow more efficient operation. Also the turbo compressors for small gasoline engines that can be replaced by high-speed electrical compressors which have the advantage that their output is not depending on the combustion engine speed and loading, and can therefore improve the fuel efficiency.
A second example is building of electrical motors which due to their special design have reduced bearing currents determined by inverter high-frequency switching. Thus instead of trying to limit the bearing currents with local measures, like special bearing lubricant or insulated bearings, which are in most of the cases increasing significantly the production costs, the whole machine can be designed with the purpose of generating low bearing current.
Superconductor excited direct-drive wind generators are also of interest for output powers of about 10 MW and higher. For this power range the permanent magnet generators diameter and mass are increasing, and are not economical from construction and transportation point of view. Due to the higher power density of superconductor excited generators it is possible to achieve higher output powers with smaller volumes.
In all the new studies JMAG will play an important role, as a numerical simulation tool. 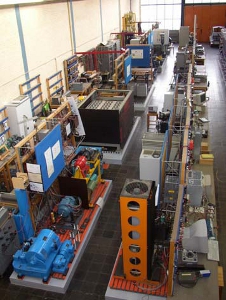 During my master thesis I’ve used JMAG to simulate different configurations of 5MW PM wind generator, with distributed and concentrated winding. The main focus was obtaining the required power, with a small torque ripple lower than 1% rated torque and to investigate the losses in stator and especially in the rotor conductive parts. The distributed winding with the number of slots per pole and phase q = 1 has high torque ripple, which requires skewing of the rotor for ripple reduction, but also quite low rotor losses. For some concentrated winding configurations, the losses in the rotor are high and some configurations like q = 2/7 and q = 1/7 cannot be used, due to rotor overheating which may cause irreversible demagnetization of the PM. For other configurations like q = 1/2, 1/5, 2/5 the rotor losses are higher than for the distributed winding but have still an acceptable value.
The additional losses in the rotor due to inverter switching supply were also calculated and it was find out that due to the high switching frequency of 2 kHz which determines a current shape close to sinusoidal shape the loss increase is about 10-15%. Further calculations showed that the segmentation of the magnets reduced the eddy current losses in the magnets to only 20% of the losses in non-segmented magnets if axial (20 segments) and circumferential (4 segments) segmentation is used. Some of the models in JMAG were tested against different FEM software codes and showed a good concordance.

At the Institute of Electrical Energy Conversion motor design and optimization is the main research direction. Classical and special machines are investigated together with the whole drive system, so that the application requirements are most efficiently fulfilled. Thus also the machine control and the mechanical components are studied.
Dr.-Ing. Bogdan Funieru graduated from “Politehnica” University of Bucharest in 2002, and has received his Ph.D. from the Technische Universität Darmstadt in 2007. Since 2007 is working as a post-doctoral assistant at the Institute of electric Energy Conversion in the same university. His main research interest is numerical simulation applied to electrical machines.