This series of technical reports discusses the challenges of motor development and the increasing role of JMAG. In the first edition of this series, we focus on “energy conservation and higher efficiency.”

There are an infinite number of motors that surround us in our daily lives. These motors are used widely in various machines from appliances such as washing machines and air conditioners to large products like automobiles and elevators in addition to portable devices such as cellar phones and video games. Reports have indicated that approximately 60% of the power used in Japan is consumed by electric motors.
The amount of work endured and knowledge gained from the trail and error of motor designers should not be forgotten in a society that has learned to take motors for granted. JMAG has been a tool that motor designers continue to use to address the challenges that they face each day.
This report introduces the types of challenges in motor development JMAG is used to overcome and why so many have selected JMAG as their tool of choice.
This technical report, the first edition of this series, focuses on the challenges of motor development from the perspective of energy conservation and higher efficiency.

More highly efficient motors are expected to contribute largely to environmental conservation in a time when conserving energy and preventing global warming have become key. Understanding the cause and areas loss is produced is vital to achieving higher efficiency. Today’s consumers are also looking for even smaller and lighter products. The ongoing demand for miniaturization while keeping the existing output requires reinforced designs that also account for the thermal design.
This section examines the causes of loss as well as the thermal design. 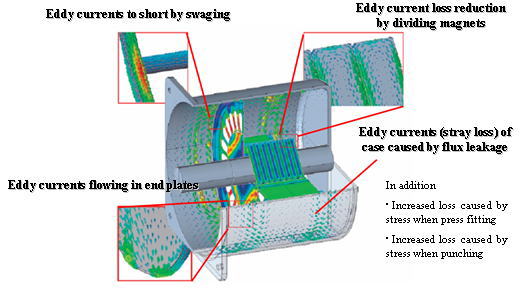 Losses Caused by Harmonic Components
Even though loss can be expressed in a single word, it stems from a wide variety of causes. The copper loss of coils[1] and the iron loss of cores[2][3] are the most prominent examples. However, losses that once could be ignored now need to be examined comprehensively to meet stringent requirements for higher efficiency. The eddy currents that occur in magnets is a classic example. Motors utilizing permanent magnets had been implemented widely to gain higher efficiency because magnet torque produced by the coercive force could be utilized in addition to the reluctance torque produced by the current. However, in actual drive system using controllers and inverters, the losses increase drastically from currents that contain many spatial harmonic components and carrier by-products of PWM[4][5]. Thermal demagnetization can become a problem triggering variations in torque if the eddy current loss in magnets increases because of the carrier by-products.
Separating magnets into sections is known to have some effect on limiting eddy currents, but research has revealed that these losses can also be reduced by modifying the geometry on the surface of the rotor and stator teeth to optimize the magnetic flux pathways[6][7][8][9]. This research focuses on observing the condition of the flux lines to define the magnetic pathways and examine possible countermeasures. Motors are often examined to include the type of control and stability by creating efficiency maps used for computer aided engineering (CAE) tools[10][11][12][13][14].

Loss Caused by Magnetic Flux Leakage
Stray load loss is a type of loss that is starting to grab the attention of designers[15][16][17]. Designs that anticipate flux leakage are increasing as motors continue to be miniaturized while increasing output, but the flux leakage in motors produce eddy currents in surrounding metal such as the cases. Especially in high rotation drives, overheating can become a problem because the amount of heat that is produced rises. Eddy currents need to be considered, especially for motors that have stators with thin back yokes.
The magnetic flux leakage may also produce eddy currents in laminated steel sheets. Laminated steel sheets are a material that reduces the eddy currents that are produced in the direction of lamination by layering these steel sheets. However, if magnetic flux is produced in the axial direction by the leakage flux, losses can occur from the eddy currents that are produced in the lamination plane because insulation is not used in the direction of the lamination plane. The same caution needs to be used for end plates attached to rotors[18].

Loss Caused by the Manufacturing Process
Characteristic degradation caused by shrink fitting and press fitting result in loss that cannot be ignored. The compression stress moves in the stator when shrink fitting or swaging is used and the permeability and loss vary by the added stress because of the joint strength between the frame and stator core[19]. Case studies have shown a loss reduction of 13%[20] by changing the geometry of the stator to focus stress in areas with minimal magnetic flux which illustrates the need to investigate shrink fitting and press fitting as measures for achieving higher efficiency.

The loss can never be completely eliminated even as more efficient motors are developed using the methods described above. As indicated earlier, designs most often include drives operating as close to the upper limit of the thermal design as possible because miniaturized higher output motors are required. The loss increases as the output increases and the temperature for each part of the motor rises. At high temperatures, there is a danger of thermal destruction caused by irreversible demagnetization in magnets that have a high temperature dependency[21] resulting in a vicious circle of higher resistance and increased loss in coils. The heat needs to be managed by finding the right balance between higher output and heat[22][23][24].
First, the heat sources need to be identified to manage the heat that is produced. The heat can be managed using the same approach as reducing loss because the heat sources are equivalent to the areas producing the loss. Countermeasures including ways to handle and disperse heat as well as the cooling method can be considered by identifying the heat sources[25][26][27]. 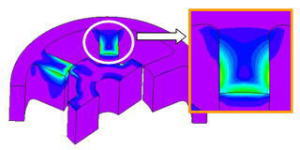 Joule Loss in an end plate caused
by leakage flux

The areas and cause of losses that are difficult to measure using actual experiments on prototypes can be identified using JMAG. This section introduces the reasons why JMAG is selected by designers. The actual methods for performing analyses are presented in our Application Catalog (hereinafter referred to as JAC: http://www.jmag-international.com/catalog/)

Highly accurate modeling is required to obtain highly accurate analysis results. Material modeling is one of the most vital elements to obtaining loss [15][16]. JMAG contains material data for over 700 materials from 12 different manufacturers. The material characteristics can be modeled without specifying any complex settings by simply dragging and dropping the desired material from a list of materials to the model. Iron loss analyses accounting for stress dependency can be performed with ease using the wide range of materials registered in JMAG’s material database that includes the magnetic flux density and stress dependency of iron loss.
Each of the material settings can also be specified by the user. The settings can be specified as desired so that even the measured data of iron loss can only be used for an analysis utilizing the material database in JMAG as a base.

The eddy currents and hysteresis loss which cause the iron loss can be obtained separately using the iron loss calculation features in JMAG (iron loss condition/iron loss study)[JAC69][JAC106]. Highly accurate results are obtained using calculations that account for the nonlinear properties of materials. Especially in eddy current calculations[JAC022], the surface layers of a model can be comprehensively analyzed using mesh simulating the skin effect which accounts for the skin depth. The efficiency can be examined using the loss that is obtained[JAC058][JAC103]. In addition, loss accounting for the carrier harmonics in the actual drive, such as inverters, can be obtained using features to link to circuit/control simulators[30][31][32][JAC090][JAC059]. The link to the circuit/control simulator is not only used to analyze the current waveform during drive, but also examine the control system on the circuit side. Some case studies have even shown a reduction in loss by optimizing the excitation timing in SR motors[33].
In JMAG, the stress distribution obtained using a structural analysis can be set as a condition for the magnetic field analysis. A magnetic field analysis which takes into account the stress dependency of the permeability and loss can be performed by obtaining the stress distribution produced by shrink fitting and press fitting first in a structural analysis[JAC087][JAC142].
Furthermore, the loss obtained in a magnetic field analysis can be specified as a condition in a thermal analysis[JAC018]Therefore, the rising temperature of the motor during drive can be investigated in addition to identifying the heat sources. The effects of thermal demagnetization of magnets caused by rising temperatures can also be investigated[JAC120].

The quality of analysis is determined by its ability to extract valuable information from the results. JMAG offers versatile post-processing that supports the evaluation of analysis results from a wide-range of perspectives. The flow of eddy currents can be comprehensively displayed in the model using a multiple cut plane feature and the magnetic flux versus time can be displayed for particular points on a model using the probe feature. The magnetic flux pathways can also be displayed three dimensionally using flux lines. The graph feature can even be used to extract the loss versus time or the frequency components using FFT with ease.

This Technical Report has discussed the challenges of motor development as well as energy conservation, looked at ways of achieving higher efficiency, and introduced how JMAG is being used.
The next technical report will focus on attaining lower vibration and lower noise as well as reducing cost.

Loss Caused by the Manufacturing Process

Issue 1 Why have a JMAG Motor Design Course