Feb 2019 JMAG-Designer Ver.18.0 has been released.
This new version of JMAG-Designer will provide many new functions, with improved usability and calculation accuracy. Please enjoy taking full advantage of it.

Winding editor
Fast and easy creation of your winding without the need to create every single winding.

Efficiency Map
Create accurate efficiency map quickly and easily in JMAG-Designer model with a breakdown of the losses each selected operating point.

Control in JMAG-Designer
Get the impact of your control drive on the losses and vibration of your FEA model.

Please refer to the following version update documents for details.
Clicking these items will display additional subsections with links to other detailed material, such as function tutorials, and more.
Users are encouraged to use of a variety of these resources.

Addition of the JMAG Application Note

These are created using the functions in JMAG-Designer Ver.17.0 and later.
Model data is included. Please feel free to use them.

Video for Introducing the New Functions of JMAG-Designer Ver.18.0

A video complete with voice audio has been prepared to offer our users a better understanding of the new functions in JMAG-Designer Ver.18.0.
This is a lecture that can be attended via internet in your own time and for as many times as required.

Click the below to attend this lecture free of charge. JMAG WEB MEMBER (Free membership)
Video for Introducing the New Functions of JMAG-Designer Ver.18.0

Fast and easy creation of your winding without the need to create every single winding. Visualize and modify with simplicity the winding pattern. Parametrize the winding to compare selected winding

Get the impact of your control drive on the losses and vibration of your FEA model. Get access to new components and the possibility to create your own.Integrate JMAG-RT model in co-simulation in order to speed-up you calculations using control circuit. 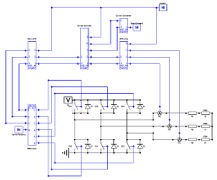 Circuit of a Vector control of a PMSM, highlighting the control section in blue and the power circuit in black

Create accurate efficiency map quickly and easily in JMAG-Designer model with a breakdown of the losses each selected operating point. Allowing for parametric studies based on efficiency maps in the early stage of the development. Furthermore, a high precision map can be generated using JMAG control circuits using PWM drive as well as Iron loss studies.

Efficiency maps can be generated in a parametric study allowing to observe the impact of the magnet width on the machine’s performance. Each map giving a breakdown of the losses at any selected operating point.

Explore new design concepts without the need of CAD parameters. Perfect for early design phase as the potential resulting shapes are only limited by the selected design space.

Selecting a design space the topology optimisation will optimize the torque and torque ripple of the machine. Changing the shapes of the model from generation to generation to reach the objectives.